I like to make my family a dessert several nights a week.  There is nothing like using a treat at the end of the meal to ensure the little ones at least try everything on their plates.  But there is a big holdup to most desserts in my house.  I still require they be somewhat healthy.  -gasp-   I know.  The title says pie.  I sense you are skeptical that anything of nutritional value could taste good.  .

But that is what this tastes like, apple pie.  But this has the added bonus of being Gluten, Dairy, Egg, and refined Sugar free.  The primary ingredient is apples and it is naturally sweetened with agave and maple syrup.

The best part though is this is truly a treat of a dessert.  I would serve this any night of the week to my family but I also would not hesitate to break this out at a dinner party. The apples really shine through and the taste is very mellow like an apple turnover.  I like to make the oatmeal cookie topping (upside down pie crust) like a thick cookie spooned and spread like a cobbler.  At the end of the recipe I have listed some ways to dress it up, but it is simply divine by itself. 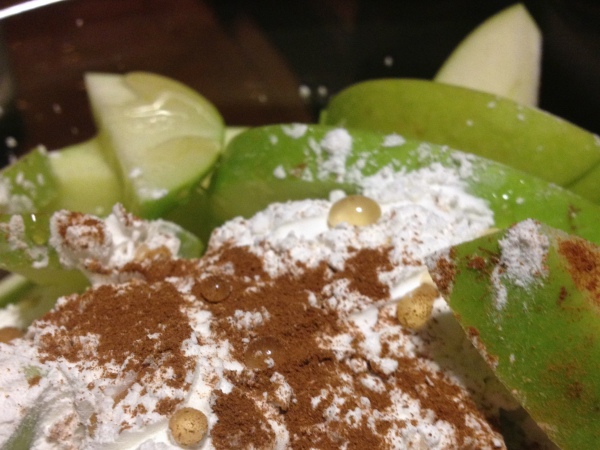 Mix the sliced apples with the cornstarch, 2 Tablespoons of agave, and 1 tsp cinnamon until they are well coated.  Place them in the baking dish.

In a separate bowl mix the flour and coconut oil until it become a paste and then add the xanthum gum and the oat mixture.

Spoon dollops of the oat batter on top of the apples and smear it flat. 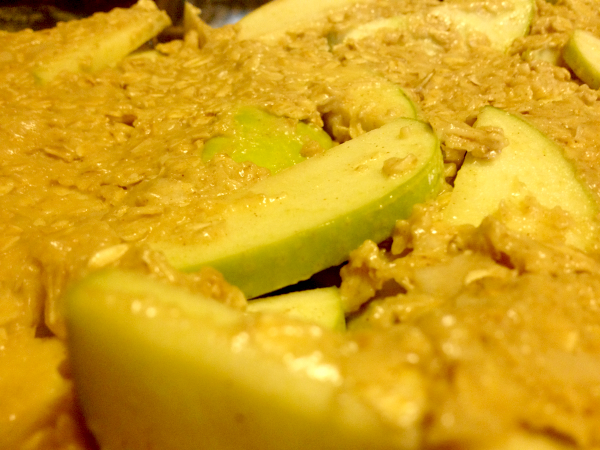 Bake for 25 minutes until the apples are soft and the crust browns.  It is best when served warm.   Serves 6 hearty portions.

This dish can be made with any of your favorite fruits.  It would be incredible with peaches, cherries, or berries.  You could use apple pie spices instead of the cinnamon.   If gluten is not an issue for you, regular flour would also work. Just skip the xanthum gum.  I usually leave the peels on but if I were to make this for anyone but family I would peel the apples and add an extra one for good measure.

To fancy it up a bit, you could serve it with a vanilla icing drizzle, whipped cream, or a traditional scoop of vanilla ice cream.   What I like best about this dish is its delicate flavor.  There is no overpowering sweetness that leaves your mouth feeling abused.  And I don’t feel bad letting the kids have a second serving.